Chapter 2 – What GOD knows, Satan exploits, and the Church has forgotten, Part 1

“Train up a child in the way he should go,

And when he is old he will not depart from it.” Proverbs 22:6

There is something essential about human beings as children that the Creator knows.  It is easy to find throughout His revealed Word.  Children are precious and they must be reached and taught GOD’s truth when they are young.  Our adversary Satan understands this full well, as is evident by even a superficial survey of his methods of misleading children. Sadly, much of the Church has forgotten this essential truth and we have either dumbed down our approach or gone AWOL in executing our responsibilities.  As the “last man standing” in this fight we must shake off our punch drunk haze and refocus on the task at hand.

Ever wonder what was first on GOD’s list of priorities as he established his people Israel?  Before they ever even got out of Egypt?  The children. What was the very first ceremony GOD chose to ordain?  The Passover.  It is this ceremony that would characterize the Jewish people for centuries and point to our celebration of the Lord’s Supper in the new covenant. And what was the purpose of this ceremony?  Let’s go to the source.

Then Moses summoned all the elders of Israel and said to them, “Go at once and select the animals for your families and slaughter the Passover lamb. Take a bunch of hyssop, dip it into the blood in the basin and put some of the blood on the top and on both sides of the doorframe. None of you shall go out of the door of your house until morning. When the LORD goes through the land to strike down the Egyptians, he will see the blood on the top and sides of the doorframe and will pass over that doorway, and he will not permit the destroyer to enter your houses and strike you down. “Obey these instructions as a lasting ordinance for you and your descendants. When you enter the land that the LORD will give you as he promised, observe this ceremony. And when your children ask you, ‘What does this ceremony mean to you?’ then tell them, ‘It is the Passover sacrifice to the LORD, who passed over the houses of the Israelites in Egypt and spared our homes when he struck down the Egyptians.’” Then the people bowed down and worshiped. The Israelites did just what the LORD commanded Moses and Aaron.

In establishing the Passover festival GOD provided the Israelites their first children’s ministry tool!  Many years ago, after participating in a Passover Seder (a Hebrew word which means “order” or “arrangement”) hosted by my sister, Lynn, and brother-in-law Joel, a Jewish Christian, Patricia and I decided to bring that tradition into our family as well.  We have celebrated a Christian form of the Seder every year since.  The ceremony is a beautiful act of worship, rich with scripture and symbols that bring the relationship between the Jewish exodus from Egypt and the sacrifice of Christ, the Lamb of GOD who takes away the sin of the world, into bright focus.   But the thing that struck me most about this several hours’ long ceremony is the important place that is given to the children.

Rather than removing the children to play games, watch a movie or color, they have a critical role to play in the meal.  The Haggadah itself, the liturgical text or script for the ceremony, was derived from the scriptures in direct response to the command to, “tell your children.”  It begins with the children searching the house for any “leaven”, a symbol for sin, so that it can be removed and the ceremony commenced.   The children ask the questions that lead us through the story of the first Passover.  Questions like, “Why is this night different from all other nights?”  From beginning to end the Passover ceremony is an interactive object lesson, bringing adults and children together to learn, remember and worship the living GOD who “passed over” our sins to bring us into communion with Him. [Part II – coming Friday] 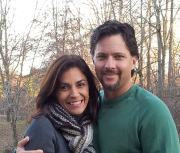