Equipped – “Geared up with God’s Word”

Parents who belong to a church that excels at its biblical mandate to equip the saints for good works, and understands one of the greatest works we have to complete is that of raising a generation that knows and loves the Lord, will tend to be better equipped to take on the task.  Those who are not blessed with a church like that, but are committed to their calling, have found the wealth of excellent material for every parenting style, personality type and gifting imaginable, and taken advantage of it.  These parents have sought out and applied GOD’s wisdom as found in scripture.  They are geared up for the battle.

Engaged – “Win their hearts with love”

Josh McDowell has said, “Truth without relationship leads to rejection.” [1]  A parent, who is committed to their child and equipped with good information, may still fail at raising up that child in the way that he should go.  We must engage our children in loving and safe relationships if we want to be heard.  Parents who are engaged seek out ways to live out their faith before their children.  These parents are interested in quantity as well as quality time.  An engaged parent moves toward their child, even when that child’s world seems strange or uninteresting to them.  They follow the example of our heavenly Father who, in order to reconcile his creation to himself, moved toward us on His own by sending his only Son.  An engaged parent makes unconditional sacrifices to win the heart of their child.

“Raise up a child in the way he should go”

And what of the child who strays?

Beyond affirming the veracity of Proverbs 22:6, I would even dare to say that every child who is raised in a genuinely Christian home and still strays from their faith as a teen or adult, lives in utter spiritual conflict, knowing full well that they have turned their back on the Truth.  It is also true that children with Christian family background like the one I described above stand a much better chance of returning to the Lord than those who never heard the name of Jesus in their childhood. Why I am so confident?  I was one of them.  I understood the Gospel and my condition as a sinner before a holy GOD and prayed to receive Christ at age seven.  I grew up in a church that, while not particularly evangelistic, did do a reasonably good job of teaching us the broad strokes of GOD’s story of redemption.   When I fell to the temptations of youth and rebelled it was not with a clear conscience, as it was with most of my friends at the time.  I didn’t wake up one morning and decide I didn’t believe in my heart that Jesus is the Son of GOD who died for my sins and laid claim to my life.  No, I argued with Him, telling Him I wanted to enjoy “the pleasures of sin for a season.” I argued with my older sister when she tried to call me back to the Lord (as she often reminds me, I actually launched a Bible at her and my brother-in-law during one particularly heated conversation).  At every turn my conscience and the Holy Spirit convicted me.  And yet I pushed ahead in rebellion for years until God finally brought this prodigal son fully to his knees in brokenness. 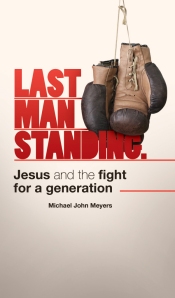