…When we left Eduardo he was serving out his time in the infamous FEBEM juvenile prison system of Brazil, never hearing from a single “friend,” his only visitor being his mother.  But then he got a letter that would change everything. The letter, came from a an old P.E. teacher from his grade school years, Marcelo, and was accompanied by a photograph of the two of them together with some other boys from one of the many schools he had passed through in his childhood.  Marcelo wrote that he had heard from some friends of the trouble Eduardo had gotten himself into and let him know that he was praying for him and would like to catch up with him upon his release.  It was a simple letter, but it was also the only letter Eduardo would get from anyone throughout his 18-month sentence.

The day of his release came and it wasn’t long after getting home that his so called, “friends” came to welcome him back. Their first order of business was to invite him on a home invasion they were planning in the coming days.  He accepted.  In the mean time he thought he should at least track down Marcelo, this P.E. teacher who he still couldn’t believe remembered him, and thank him for the kind letter.  He found Marcelo, thanked him and, after a little chitchat, was ready to go back home, mission accomplished.  But then Marcelo invited him to come out to a party with some youth from his church.  Eduardo was leery of going to a “church” thing, but Marcelo assured him it was purely social and not a worship service.  He accepted, completely missing that the night of the party was the same night as the planned robbery.

Attending that party with Marcelo, Eduardo was taken aback by the other youth he met.  They were different.  The way they talked to each other and to him was completely foreign to him, but he liked it.  The next day his “friends” came around and asked why he had blown them off and not shown up as planned.  Eduardo made some excuses and rescheduled for another night the following week.  The day of that robbery Marcelo paid an unexpected visit to Eduardo and invited him to join them again for a night out.  This time Eduardo jumped at the chance, completely forgetting that he was “double booking” himself yet again. Once more he had a great time with Marcelo and his new friends and was more and more intrigued by what made them so different.

The next morning the old crew showed up at his home, even more frustrated with being dissed another time.  Eduardo wasn’t so sure of the sincerity of his apology this time, but 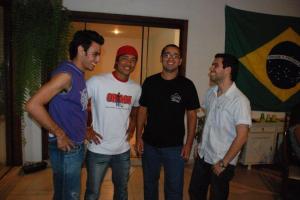 rescheduled once more just the same.  The day came and this time it was Eduardo calling Marcelo to ask if he could please come to a worship service being held for the youth at a local church that night.  It was the last time Eduardo would schedule a robbery, because that night, as Marcelo shared the good news of Jesus with the youth gathered together, GOD stole Eduardo’s heart for good. 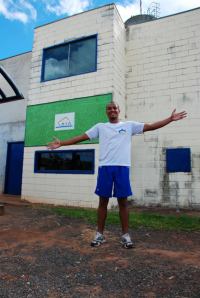 Eduardo outside the juvenile detention center

Soon after, Marcelo introduced Eduardo to Patricia and me at an Open Arms outreach project and we got him plugged in as a volunteer, teaching hip-hop dance to the kids.  Marcelo, Patricia and I have been walking with Eduardo ever since.  He has lived in our home, sharing a room with our boys, when things were going badly in his.  He has shared meals and holidays with our family.  Eduardo has gone on to go to college, has planted (at the time of this writing) three Open Arms outreach projects, has shared his testimony all over Brazil, began an outreach back into the same juvenile facility he spent time in, and has led untold numbers of children and youth to Christ.  Eduardo says today, “After about three months of resisting the temptation of returning to drugs and crime, my so-called “friends” stopped coming around.  Had it not been for my new-found faith in Jesus and friends from Open Arms, I don’t think I would have made it.” 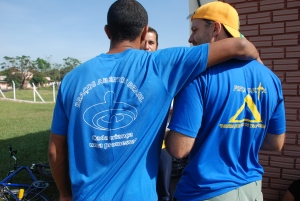 Eduardo and I at an Open Arms Outreach 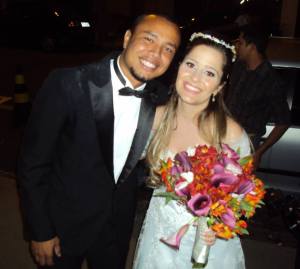 Eduardo and his bride, Claudia

An interesting footnote to this story of Eduardo is that, on one particular evening soon after his conversion, he was invited with some of the other church youth to a meeting at a house belonging to the family of one of the girls in the youth group, one of his new best friends.  As they arrived at the house Eduardo’s jaw dropped.  It was the very same house he and his crew had planned to rob the day he went to jail, the day a voice inside him said, “Not this house.”  He knew now whom that voice belonged to.